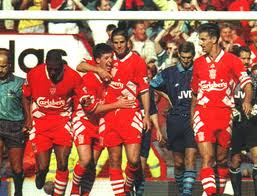 A member of Liverpool's youth team, Fowler joined the senior side in 1993 and quickly established himself as a talented goalscorer with 18 goals in 34 appearances that first season. But nothing quite prepared the Liverpool faithful for his performance against Arsenal in the second match of the 1994-95 season.

Playing before a crowd of over 30,000 at Anfield, Fowler opening the day's scoring in a 26th minute when Arsenal defender Martin Keown failed to clear a cross from a free kick. The ball dropped to the feet of Fowler, who scored with a simple finish from eight yards out. He had to work a little harder for his second goal three minutes later, shooting across the goal to send the ball in off a rebound from the far post.

But his best goal of the day was his last. In the 31st minute, he beat both Keown and goalkeeper David Seaman, who collided with one another, then slotted the ball into the open net from a narrow angle. Arsenal failed to mount a serious challenege after that point as the hosts were content to sit on the lead and the match ended 3-0.

Officially, only 4 minutes, 33 seconds passed between Fowler's first and third goals. Although there have been faster hat-tricks, including Tommy Ross's 90-second tally for Ross County in 1964), Fowler's remains the fastest in the history of the Premier League.