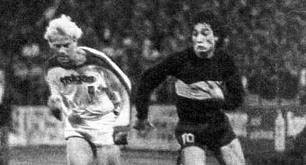 On 1 August 1978, Boca Juniors won their second international trophy, beating Borussia Mönchengladbach over two legs in the Intercontinental Cup. Despite the date, it was actually the 1977 edition.

The Argentinian team earned the right to play in the competition by winning their first international trophy--the Copa Libertadores--the year before. As the Intercontinental Cup was designed to pit the Copa Libertadores champion against the European Cup winner, they should have faced Liverpool, who won the 1977 European Cup over Mönchengladbach. But Liverpool declined the invitation, opening it up for the German side.

They met in Buenos Aires for the first leg on 21 March and battled to a 2-2 draw at La Bombanera to set up the decisive second leg in Germany. Playing before a crowd of 38,000 at the Wildparkstadion in Karlsruhe, the visitors quickly staked their claim to the trophy with a goal from striker Darío Felman in just the 2nd minute. A second goal followed in the 33rd minute when the ball fell at the feet of striker Ernesto Mastrángelo just inches outside the German goal for him to easily tap home. Four minutes later, Boca midfielder Carlos Salinas (pictured) all but settled the tie when he beat the German keeper one-on-one from the middle of the box.

With more than a half remaining, the Germans applied tremendous attacking pressure while players made flying and diving tackles all over the pitch. Boca's defense refused to break, however, and they claimed the win by the score of 0-3.

Boca won the Intercontinental Cup again in 2000 and 2003, while Mönchengladbach never returned to the competition.