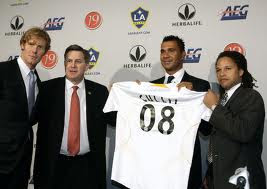 On 11 August 2008, the Los Angeles Galaxy made changes at the top of their organization, accepting the resignation of manager Ruud Gullit and sacking general manager Alexi Lalas.

Lalas had held the general manager position since April 2006, when he moved to LA from the New York Red Bulls. He was instrumental in signing midfielder David Beckham from Real Madrid for a 5-year deal worth $32.5 million. Beckham arrived in July 2007 and Gullit followed shortly afterward.

The former AC Milan star joined LA in November 2007 on a three-year deal with an annual salary of $2 million making him the highest-paid coach in the league at the time. His credentials included short stints at Chelsea (1996-98), Newcastle (1998-99), and Feyenoord Rotterdam (2004-05).

The investments prompted many to tip the Galaxy as title contenders for 2008, but their performance on the pitch was poor. They hovered near the bottom of the Western Conference for most of the 2008 season and suffered through a seven-match winless streak that ended with the departure of Gullit and Lalas. The club brought former US national team manager Bruce Arena in for the 2009 season, which ended with the Galaxy at the top of the Western Conference and runners-up in the MLS Cup Final.

Lalas went on to become an analyst and commentator for ESPN and ABC, while Gullit served for six months as the manager of Russian Premier League club Terek Grozy before getting sacked in June 2011.