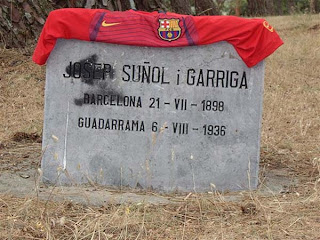 On 6 August 1936, FC Barcelona president Josep Sunyol was captured and executed by fascist troops. His death remains a grim reminder of Catalonia's oppression under the Franco regime.

Born in 1898, Sunyol first became involved with Barça in 1926 and was elected to the Board of Directors two years later. During that time, he was also active as a left-wing politician and journalist, using his newspaper La Rambla and his position in the Spanish legislature to oppose the dictatorship of Primo de Rivera.

He was elected president of FC Barcelona in 1935. When the Spanish Civil War broke out soon afterward, both the club and the Catalan region were targeted by the right-wing nationalists as symbols of republican resistance. In August 1936, only one month into the conflict, Sunyol set out from Barcelona for a meeting with fellow republicans in Madrid. But as he passed through a Franco-held region in the Sierra de Guadarrama north of the Spanish capital, he was recognized by nationalist troops who apprehended him, then executed him. The nationalists' anti-Catalonian sentiments ran so deep that they ordered the name on Sunyol's gravestone to be spelled in the Castilian style as "Josep Suñol."

Sunyol's death was only a small part of the abuses the city and club of Barcelona suffered under Franco, but he is remembered as a martyr to the Catalan cause.
Posted by Brian Seal at 12:01 AM