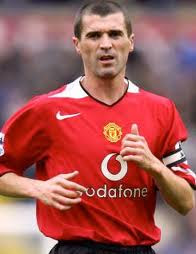 On 10 August 1971, future Manchester United and Republic of Ireland captain Roy Keane was born in Cork. A tenacious central midfielder, he was known for his competitive spirit both on and off the pitch.

He began his career with Cobh Ramblers (1989-90) and Nottingham Forest (1990-93), but spent the majority of his career at Manchester United where he played from 1993 to 2005. United paid a then-record British transfer fee of £3.75 million to sign him from Forest and Keane delivered instantly, scoring a brace in his Old Trafford debut, a 3-0 victory over Sheffield United. That first season, United went on their first league and FA Cup double.

He would go on to win seven league titles, four FA Cups, and the Champions League with United, but his success on the pitch was often overshadowed by his temper, with Keane receiving a total of 11 red cards during his time with United, often for violent conduct. In a 2001 match against Manchester City, Keane was ejected for brutally tackling Alf-Inge Haaland. He later revealed in his autobiography that the challenge had been an intentional retaliation for a dust-up the two had had in a previous match. The admission resulted in a further 5-match ban and a fine of £150,000.

Keane left United in 2005 after several public disagreements with his teammates and manager Alex Ferguson. He moved to Celtic, but made only 13 appearances for them before retiring in 2006.

He turned to management later that year and has helmed Sunderland (2006-08) and Ipswich Town (2009-11). Although he was sacked from Ipswich in January 2011, he still lives nearby with his wife and five kids.