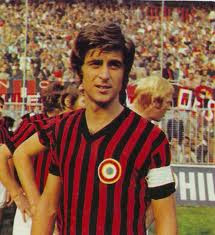 After that first European Cup, a 2-1 victory over Benfica, Rivera finished as runner-up to Dynamo Moscow keeper Lev Yashin for that year's Ballon d'Or. He finally claimed the award in 1963 after leading Milan to that year's European Cup, despite missing the final against Ajax due to an ankle injury.

Rivera also starred for Italy, making 60 appearances between 1962 and 1974. During that time, Italy won the 1968 European Championship and reached the final of the 1970 World Cup (where they lost to Brazil).

After his retirement, he held a vice-president position with Milan until 1986. In 2004, Pelé named him one of the 125 greatest living players.