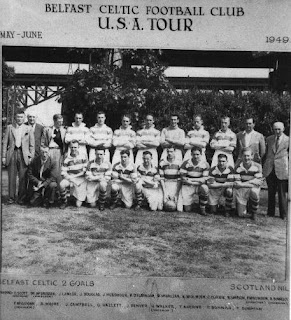 On 8 May 1949, the Philadelphia Nationals and the New York Americans played for that year's ASL title at Randall's Island in New York City, though the match was interrupted for a friendly between an ASL All-Star team and visiting Belfast Celtic (pictured).

The ASL title should have been decided a few weeks earlier, but three teams - the Nationals, the Americans, and Brooklyn Hispano - ended the season in a three-way tie for first, so the ASL scheduled a playoff. The Nationals, by virtue of the best goal differential of the three teams, received a bye to the Final, where they would play the winner of the first playoff match between Brooklyn and New York.

The ASL set the Final for 8 May as a prelude to the previously-scheduled friendly against Belfast. Belfast were a high-profile side, with 19 Irish League trophies, including the 1947 and 1948 titles, and the friendly on 8 May was the starting point for their 10-match tour of the US and Canada that spring and summer. The ASL planned to hold the ASL Final first, followed by the All-Stars' match against Belfast.

As it turned out, however, Philadelphia and New York were even at the end of 90 minutes (some reports say 2-2, others say 3-3), so they stopped play and allowed the friendly to proceed. Belfast and the All-Stars (who included members of the New York Americans) drew 2-2, then the championship match resumed, with Philadelphia eventually claiming the title. It was part of a double for the team, who also won that year's Lewis Cup.
Posted by Brian Seal at 12:01 AM