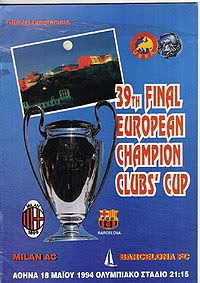 On 18 May 1994, AC Milan dismantled Barcelona 4-0 in the UEFA Champions League Final at the Olympic Stadium in Athens. It was Milan's fifth European Cup/Champions League title.

The teams looked evenly matched on paper - both had won their domestic leagues that season and both had advanced from the earlier rounds with ease, winning their groups before cruising through the semifinals. Both also had recent experience in the Finals - Milan finished as runners-up the previous season, while Barcelona won the Final the season before that. If either side had an edge, most considered it to be Barcelona, as Milan were missing key players to injury (Marco van Basten and Gianluigi Lentini) or suspension (captain Franco Baresi).

The Italians, under manager Fabio Capello, rose above the circumstances to dominate the match from the beginning. They were led by forward Daniele Massaro, who recorded a brace before half-time (22', 45'). Shortly after the break, forward Dejan Savićević - who had provided the assist for Milan's first goal - chipped the Barça keeper to extend the lead to 3-0 in the 47th minute.

Barcelona, managed by Johan Cruyff, failed to mount any serious challenge and Milan defender Marcel Desailly - who had played for Marseille in the previous Final and beat Milan - added a fourth goal in the 59th minute to conclude the day's scoring.