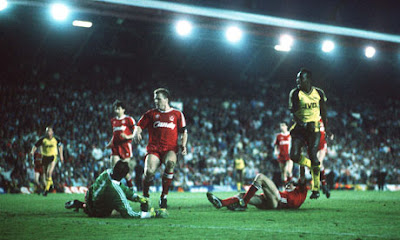 On 26 May 1989, Arsenal won the League in dramatic fashion, beating runners-up Liverpool 0-2 at Anfield in the last match of the season.

Despite leading the race for the title earlier that spring, a recent loss to Derby County and a draw with Wimbledon left Arsenal in second place, three points behind Liverpool. Liverpool also had a better goal differential which meant that Arsenal needed not only to win, but to win by two goals. It seemed an impossible task, as Liverpool had not lost by two more or goals at Anfield all season (and had, in fact, lost there only twice all year).

It was an emotional day, with Liverpool still feeling the effects of the Hillsborough disaster from the previous month in which 96 of their supporters died due to overcrowding and police mismanagement. Recognizing that, Arsenal manager George Graham planned to keep the game close for the first half, try to get a goal early in second half, then push a second. Which is almost exactly how it played out.

After a scoreless first half, Arsenal striker Alan Smith scored a 52nd-minute goal after a Nigel Winterburn free kick. With about 14 minutes left in the match, and Arsenal still leading 1-0, Graham switched the Arsenal formation from a defensive 4-5-1 to a more attacking 4-4-2. Liverpool took advantage of the extra space in midfield to launch several counter-attacks, but could not produce an equalizer.

In the second of three minutes of injury time, Arsenal keeper John Lukic rolled the ball out to right back Lee Dixon, who sent a long pass to Smith. Smith lobbed it into the path of a charging Michael Thomas just outside the Liverpool box. Thomas (pictured at right) evaded Liverpool defender Steve Nicol, then chipped the ball over the diving Liverpool keeper, Bruce Grobbelaar. It went into the net with 25 seconds to spare - deciding the title with the final goal in the final minute of the season's final match. Commentator Brian Moore reported the action saying "Thomas, charging through the midfield ... it's up for grabs now ... Thomas, right at the end!"

The match has since been recognized as one of the most dramatic title wins in English history and featured in the 1997 film "Fever Pitch."