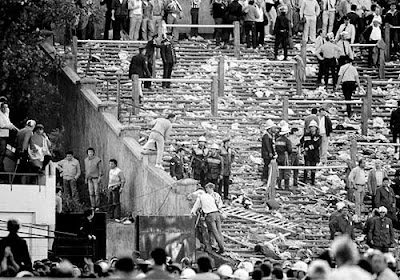 On 29 May 1985, as Liverpool and Juventus prepared to play the European Cup Final in Brussels' Heysel Stadium, pre-match rioting resulted in 39 deaths and over 600 injuries. UEFA Chief Executive Lars-Christer Olsson later called it "the darkest hour in the history of the UEFA competitions."

The trouble started approximately one hour before the scheduled kick-off time. Behind one of the goals, the opposing fans, who were divided into two sections separated by a narrow strip of unoccupied territory and bordered by chain-link fencing, began to throw bottles and stones over the fences at each other. As the situation grew increasingly hostile, a group of Liverpool supporters charged through and over the fencing into the Juventus enclosure. The Juventus fans retreated against a wall, which collapsed under the pressure. Of the 39 people killed, 32 were Juventus fans, while the other seven were neutrals.

Upon seeing their fellow supporters attacked, the Juventus fans at the other end of the stadium began rioting and fought with the police for over two hours, even after the match started (officials chose to play the match for fear that cancellation would result in increased violence - Juventus won 1-0 with a 56th-minute penalty scored by their French midfielder Michel Platini).

In response, UEFA banned British clubs from European competition for five years, with Liverpool receiving an additional three-year ban (later reduced to one extra year). British police investigated the incident and eventually arrested 27 people for manslaughter. In a trial held in Belgium, 14 people - all Liverpool fans - were given three-year sentences.