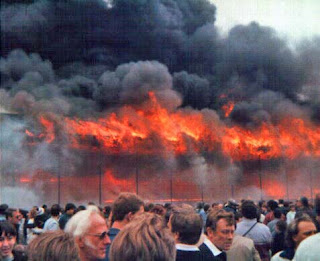 On 11 May 1985, Bradford City's Valley Parade stadium caught fire during their last match of the season, killing 56 spectators and injuring 265 others.

The day started triumphantly for Bradford City. They had secured the Division Three title five days earlier with a 2-0 win over Bolton Wanderers, so the League presented the trophy to the club before their match, played against Lincoln City. The presentation brought 11,076 people out to see the match, almost double the season average of 6,610.

People in the crowd noticed the first signs of fire under the main stand about five minutes before the break. Later reports described it as a "glowing light," possibly from a dropped match or cigarette that landed on trash and debris that had collected under the stand. The fire spread quickly across the wooden stand and roof, so that, within four minutes, the entire stand was engulfed in flame.

The roof dropped burning timbers and other material onto the crowd, some of whom tried to escape through the back of the stand, while other rushed onto the pitch, helped by police officers and Bradford City striker John Hawley, who climbed into the burning stand to help rescue a stranded supporter. Of the 56 people who died, several succumbed to smoke inhalation, while others were crushed in the panic or were burned. One of the fatalities was 86-year old Sam Firth, a former chairman of the club.

Sadly, prior to the fire, several people had warned the club about the need to replace the wooden stand and roof and to clear the debris from under the stand, but Bradford City had been slow to implement renovations. But having secured promotion, they had just ordered a new steel roof and concrete terracing that would have minimized any damage.

The stadium re-opened in December 1986 and remains home to Bradford City.