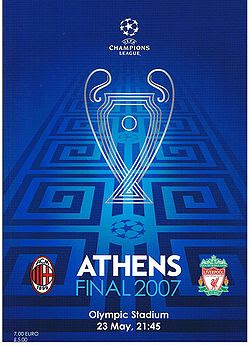 On 23 May 2007, AC Milan won their seventh European Cup/Champions League trophy, beating Liverpool 2-1 at the Olympic Stadium in Athens in a rematch of the 2005 Final.

It was a dramatic finish for Milan, who had earlier been barred from competing in the tournament as a result of their involvement in the Serie A match-fixing scandal of 2005-06. But on appeal, the Italian football association allowed Milan to enter the competition in the third qualifying round, rather than directly into the group stage.

Despite having two of the tournament's top scorers - Milan's Kaká had a tournament-high 10 goals going into the Final, while Liverpool's Peter Crouch was tied for third with 6 goals - the defenses held strong through most of the first half (Crouch didn't come on until the second half). Milan striker Filippo "Pippo" Inzaghi broke the deadlock with a controversial 45th-minute goal that appeared to deflect off of his arm past keeper Pepe Reina.

Liverpool pressed for an equalizer in the second half, but were unable to beat Milan's goalkeeper, Dida. Inzaghi then scored a second goal in the 82nd minute. The match appeared to be won, but Liverpool's Dirk Kuyt made sure the last few minutes were exciting when he found the net in 89th minute. Liverpool could not muster a second, however, and the match ended as a 2-1 Milan win.