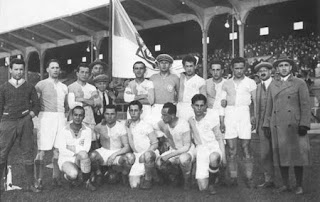 On 1 May 1926, Viennese club Hakoah, on a tour of the United States, played a match against a group of American Soccer League All-Stars at the Polo Grounds in Manhattan. The match drew a crowd of 46,000, setting a US attendance record that would not be broken until after Pelé signed for the New York Cosmos in 1977.

Founded in 1909, Hakoah (pictured) was an all-Jewish sports club, taking their name from the Hebrew word for "strength." Their football squad was very successful, finishing second in the Austrian league in 1922, then winning the title in 1925. They frequently toured the world, drawing large crowds in part by attracting spectators from the local Jewish populations.

Hakoah's opponents on the day were an All-Star team drawing from the rosters of the New York Giants and Indiana Flooring. The goalkeeper was the Giants' Pete Renzulli, who later described Hakoah as having the ball for 87 out of the 90 minutes in the match. The All-Stars, however, made the best of their limited possession, scoring three times off counter-attacks to win 3-0.

Despite the crowds, the tour was a financial failure for Hakoah, reportedly losing over $30,000 for the club. But Hakoah's players enjoyed the tour so much that many chose to remain in the US and eventually formed a new club named New York Hakoah, who went on to win the 1929 US Open Cup.
Posted by Brian Seal at 12:01 AM