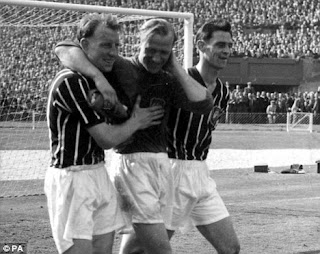 On 5 May 1956, Manchester City defeated Birmingham City 3-1 in the FA Cup Final before a crowd of over 100,000 at London's Wembley Stadium. It was a remarkable win, considering that the Man City goalkeeper, Bert Trautmann (pictured, center), played the last seventeen minutes with a broken neck.

Although it was Manchester City's second consecutive appearance in the Final, having lost 3-1 to Newcastle the previous year, the English press hailed Birmingham as favorites due to a strong run up to the Final that saw them concede only two goals while scoring eighteen. Man City, on the other hand, had advanced in every round by a mere one-goal margin. But they had an advantage in Trautmann, whom the Football Writers' Association had recently named Footballer of the Year.

Manchester City pressured the Birmingham goal from the opening kickoff, resulting in a third-minute strike from forward Joe Hayes that gave them a 1-0 lead. Birmingham quickly equalized, however, when a 15th-minute shot ricocheted off a Man City defender to wrong-foot Trautmann, then landed in the path of forward Noel Kinsey, who slotted it home.

The rules at the time did not alow for substitutes, so after Trautmann recovered, he insisted on staying on the pitch as Manchester City complete the 3-1 win. Three days later, Trautmann's neck still hurt, so he went to a doctor who confirmed that he had dislodged five vertebrae, one of which was broken in two. Trautmann became a folk hero at Manchester City, for whom he played until 1964, making over 500 appearances.