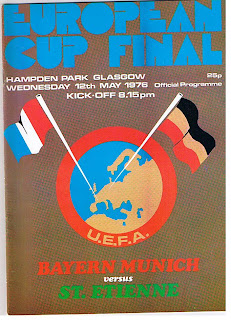 On 12 May 1976, Bayern Munich won their third consecutive European Cup, beating Saint-Étienne 1-0 at Glasgow's Hampden Park. It is the last time that any club has won three straight competitions and only the third time that a club has won more than two consecutive Finals.

Saint-Étienne, that season's Ligue 1 champions, had already visited Hampden Park in that year's competition - they beat Rangers there by the score of 1-2 in the second leg of their Second Round meeting with the Scottish club to advance 4-1 on aggregate. As a result, thousands of Scottish supporters turned out to cheer them on in the Final. Combined with the French club's own visiting fans, approximately 45,000 of the 55,000-strong crowd were supporting Saint-Étienne.

The Final was a close contest. Bayern thought they had taken an early lead, but Gerd Müller's goal was flagged (incorrectly) as being offside. The French side then had a number of first half opportunities, but could not take advantage. A 34th-minute shot from midfielder Dominique Bathenay beat Bayern keeper Sepp Maier, but hit the crossbar. Five minutes later, midfielder Jacques Santini's shot just missed the net, slipping inches wide of the goalpost.

The missed chances shook the confidence of the Saint-Étienne players and Bayern took control of the match early in the second half, as midfielder Franz Roth turned a 57th-minute Franz Beckenbauer free kick into the net. The French side attacked with renewed vigor, but were unable to get past the Germans' defense.

Bayern's victory matched the accomplishment of Ajax, who won the European Cup three straight times from 1971 to 1973. The only team with a better streak is Real Madrid, who won the first five European Cups from 1956 to 1960.