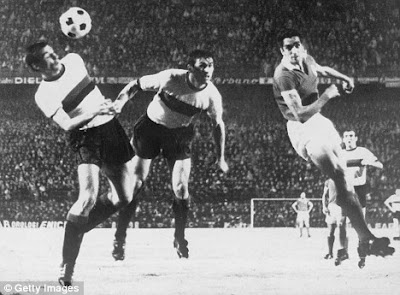 On 27 May 1965, Inter defeated Benfica 1-0 in the European Cup Final before a crowd of 85,000 at the San Siro. It was the second consecutive European Cup for the Italian side, who would not win it again until 2010.

At the time, Benfica had themselves recently won two straight European Cups (in 1961 and 1962) and boasted the tournament's joint top scorers in Eusébio and José Augusto Torres (pictured at far right), both with nine goals. But Inter were playing at their home stadium, where, playing the catenaccio system masterminded by their manager Helenio Herrera, they had conceded only one goal throughout that season's competition. The Final thus shaped up as a classic battle of offense against defense.

On the day, Inter were helped by the poor weather, with rain slowing both the pitch and the speed of the Portuguese attack. Inter received another lucky break when their Brazilian midfielder Jair de Costa took what appeared to be an easily-handled shot on goal in the 42nd minute. The wet ball slipped through the hands of Benfica keeper Costa Pereira to give Inter a 1-0 lead. Which, as it turned out, was all they needed as Benfica proved unable to crack the Italians' defense.

Inter returned to the Final twice more, losing to Celtic in 1967 and Ajax in 1972 before winning their third European Cup/Champions League trophy in 2010 over Bayern Munich.