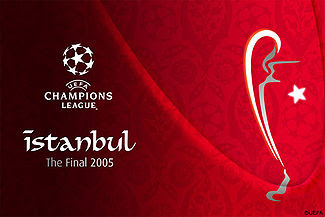 On 25 May 2005, Liverpool won their fifth European Cup/Champions League trophy, coming back from a 3-0 deficit to beat AC Milan on penalties 3-3 (3-2) before a crowd of 70,000 at Istanbul's Atatürk Olympic Stadium.

The win salvaged an otherwise disappointing season for the Reds, who had finished the Premier League season in fifth place after an early FA Cup elimination and a loss to Chelsea in the League Cup Final. The win also allowed Liverpool to compete in the next season's Champions League - their fifth-place League finish was outside the four qualification spots, but UEFA granted them a special exemption to compete in 2005-06 as title holders.

Milan were favored to win and, true to form, took an early lead with a volley from captain Paolo Maldini after only 51 seconds (it was the fastest-ever goal in a European Cup/Champions League Final and made the 36-year old Maldini the competition's oldest-ever goalscorer). Liverpool attacked the Milan area, but were unable to break through the Italians' defense. Liverpool's efforts exposed them to a counter-attack, resulting in two more Milan goals before the break, both from Argentinian striker Hernán Crespo (38', 42'), on loan from Chelsea.

Milan's 3-0 lead looked insurmountable, but Liverpool renewed their pressure after the break. They played only three defenders in order to bolster their attack, which paid dividends when they scored three goals in a six-minute period (Gerrard 54', Šmicer 56', Alonso 60') to draw level. Despite Liverpool's weakened back line, Milan were unable to score and the match went to extra time, then to penalty kicks.

Milan went first in the shootout and missed their first two kicks - the first went over the bar, while the second was easily saved. Liverpool made their first two, but their third was saved, so that after four kicks, Liverpool were ahead 3-2. Milan's Ukrainian striker Andriy Shevchenko, who had scored the winning penalty in the 2003 Final, stepped up to take Milan's last kick, knowing that he needed to convert it in order to prevent Liverpool from winning. Unfortunately for Milan, he sent it right down the middle where it was saved by keeper Jerzy Dudek.