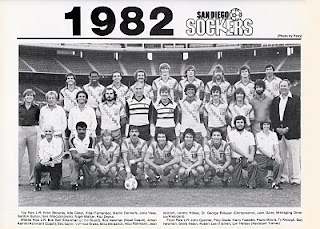 On 8 March 1982, the San Diego Sockers won the first of their 10 indoor championships, beating the Tampa Bay Rowdies 10-5.

It was the fifth NASL indoor season, with thirteen of the fourteen teams from the league's earlier outdoor season taking part. San Diego had lost in the outdoor playoffs to the Cosmos, who went on to win that title, while Tampa Bay had failed even to make it into the postseason.

Tampa Bay qualified for the indoor playoffs, however, with the league's third-best record (behind Edmonton and Chicago), then advanced to the final with wins over Montreal and Tulsa. San Diego, who had finished fourth overall, reached the final by beating Vancouver and Edmonton.

The final was played over two legs, with San Diego winning the first 9-7 on 3 March. Five days later, they dominated the second leg, taking a 5-0 lead in the first half en route to the 10-5 final score. San Diego striker Juli Veee, the league's top scorer that season, got a hat-trick.

The Sockers went on to win four more straight titles between the NASL and MISL, then another five between 1988 and 1992.