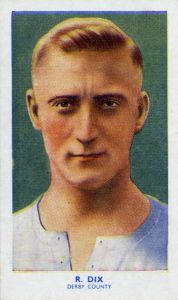 On 3 March 1928, Bristol Rovers striker Ronnie Dix became the Football League's youngest goalscorer when he found the net at the age of 15 years, 180 days.

Playing in his first professional season, Dix, who was born in Bristol, scored his record-setting goal in a Third Division South match against Norwich City, which Rovers won 3-0. It was one of the few highlights for them that season, though, as they finished 19th out of 22 teams.

Dix remained with Bristol until 1932, making 100 league appearances and scoring a total of 33 goals. He then played for Blackburn Rovers, Aston Villa, Derby County, Tottenham Hotspur, and Reading before retiring in 1949 (he also earned a lone cap for England in 1939).

He remains the Football League's youngest goalscorer.
Posted by Brian Seal at 12:01 AM