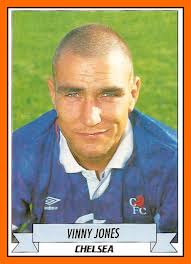 On 21 March 1992, Chelsea midfielder Vinnie Jones set an English football record by getting a yellow card after only three seconds against Sheffield United.

Jones had previously established a reputation for aggressive play and a casual attitude toward the rules of the game, most notably during a three-year spell with Wimbledon's FA Cup-winning "Crazy Gang." But he left there in 1989 and spent a season with Leeds where his disciplinary record improved--he got only three yellows all season long.

In 1990, he moved to Sheffield United, then moved again a year later, joining Chelsea in 1991. While there, he continued to toe the line, but slipped up in a home match against his former club, Sheffield United, to earn the record-setting caution. To make matters worse, United went on to win, 1-2.

Jones returned to Wimbledon, playing there from 1992 to 1998, then retired in 1999 after a season with Queens Park Rangers. Afterward, he took up acting, usually in roles complemented by his playing reputation.