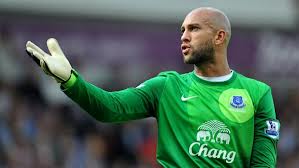 He started his career in 1997 with the North Jersey Imperials in the United States Independent Soccer Leagues, but moved to Major League Soccer in 1998 with the MetroStars. After making limited appearances in his first few seasons there, he claimed the starting job in 2001. Later that year, he became the  youngest player to receive the league's Goalkeeper of the Year award.

In 2003, Manchester United signed him for $4 million to take over from Fabien Barthez as the club's first-choice keeper. But despite a strong start, winning the Community Shield with a penalty save against Arsenal, he struggled in his next two seasons, leading to his departure to Everton on loan in 2006.

He shined at Everton, making his move permanent in a 2007 deal worth a reported £3 million, and has remained their starting keeper ever since. In January 2012, he even scored a goal, as a long clearance was pushed along by the wind into the opposing net, making him only the fourth keeper in Premier League history to do so.

In addition to his club duties, Howard has been a regular starter for the United States since the 2007 CONCACAF Gold Cup and has, to date, earned 85 caps.