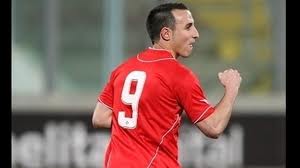 They had met Liechtenstein only once before, playing to a 1-1 home draw in 1981. So, even though their matches starting getting more competitive in the 2000s, their dominating performance in the 2008 friendly came as a surprise.

Playing at the Ta' Qali national Stadium in the center of Malta, Mifsud (pictured)--a striker who played his club ball for Coventry City--scored the opening goal in the second minute with a penalty. He completed a hat-trick within the first 21 minutes, with his third goal also coming from the spot--the foul prompting the second penalty kick led to a red card for Liechtenstein's Fabio d'Elia for denying a clear goalscoring opportunity. Helped by the man advantage, Malta were up 4-0 by the break.

Franz Burgmeier closed the gap to 4-1 in the 51st minute, but Mifsud scored twice more (60', 69') to extend the lead. It was the first time any Maltese player scored five times in an international. A final Malta goal four minutes from time ended the day at 7-1.