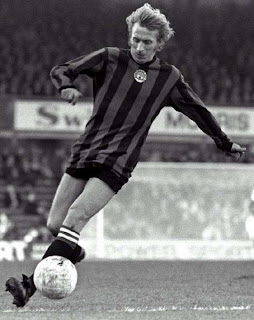 Twenty years old at the time, Law had spent the previous five years at Huddersfield Town, who were in the top flight when he signed for them in 1955, but were relegated to Division Two the following year. The drop opened up playing time for Law, who earned his first start in December 1956 and went on to score a total of  19 goals in 91 appearances for the Terriers.

That was enough to attract the interest of several clubs, including Manchester United and Liverpool (whose manager, Bill Shankly was the boss at Huddersfield Town from 1956 to 1959). But City got his signature in March 1960 for £55,000, more than doubling the club's previous record of £25,000 set in 1950 when they bought Roy Paul from Swansea City.

He returned to Manchester one year later to play for United, spending eleven seasons at Old Trafford, where he was named the 1964 European Player of the Year. But he rejoined City on a free transfer in 1973 for his last season. While there, he scored his last competitive goal in an April 1974 match that helped seal United's relegation that year.
Posted by Brian Seal at 12:01 AM