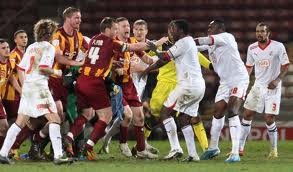 Played at Bradford's Valley Parade ground, the League Two match paired two teams headed in opposite directions. Crawley, freshly promoted from the Football Conference, had won their previous three games to climb to fourth in the table. The hosts, meanwhile, had lost three and drawn one of their last four, falling to nineteenth.

Holding to form, Crawley went up 0-1 in the 54th minute with a header from Leon Clarke. Bradford's Chris Dagnall equalized in the 72nd minute, but Gary Alexander scored two minutes later with another header to restore Crawley's lead. Despite seven minutes of added time, Bradford were unable to find the net again.

After the final whistle, Bradford defender Andrew Davies lashed out at Crawley captain Pablo Mills, prompting players from both sides to engage in a full-on brawl. Both Davies and Mills received red cards, as John McLaughlin and Luke Oliver from Bradford and Crawley's Claude Davis.

The five reds matched a Football League record for a single game, set in a February 1997 contest between Plymouth Argyle and Chesterfield and matched by Bristol Rovers and Wigan Athletic in December of that year.