20 March 1991 - A Different Kind Of Bombardment In Dresden 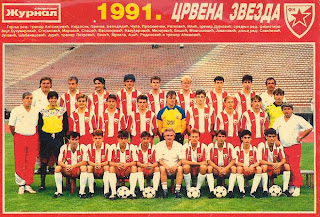 On 20 March 1991, a European Cup quarterfinal between Red Star Belgrade and Dynamo Dresden was halted in the 75th minute due to rioting in the stands. It never resumed and went into the books as a 3-0 win for Red Star.

Red Star won the first leg 3-0 in Belgrade two weeks earlier, so Dresden went into the second leg with a difficult task ahead of them. But they got a lift when the referee awarded them a handball penalty in the third minute, which striker Torsten Gütschow duly converted.

The two sides exchanged several chances in the remainder of the first half, with Red Star getting the better looks. Only outstanding play from Dresden goalkeeper Thomas Köhler kept the hosts ahead at the break. Red Star finally scored in the second half, with winger Dejan Savićević evading four defenders and firing past a fifth from close range to draw the visitors level in the 51st minute.

Twenty minutes later, they took the lead with a strike from forward Darko Pančev, who fired the ball between Köhler's legs and into the far corner of the net. That was too much for the home supporters--when the referee awarded Red Star a corner kick shortly afterward, the Dresden fans began hurling objects at both the Red Star kicker and the assistant referee.

After a few futile attempts to calm the fans, referee Emilio Soriano Aladrén ordered the teams off the pitch and canceled the remainder of the game. Although Red Star were leading 2-1 at the time, UEFA later awarded them a 3-0 victory and banned Dresden from UEFA competitions for the following season.

Red Star went on to beat Bayern Munich in the semifinals and then took the trophy with a win over Marseille on penalties in the final.