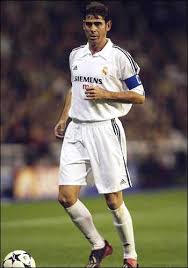 He joined Real Madrid in 1989 after two seasons with Valladolid and won the league in his first season there. Despite playing at center back and as a defensive midfielder, he was a prolific scorer, with a total of fifteen goals in his first two seasons. Then, in his third season, he recorded a career-high 26 goals across all competitions.

Additional league titles followed in 1995 and 1997. Then, in 1998, he won the first of three Champions League trophies as Real Madrid beat Juventus 1-0 in the final, one of eight clean sheets they kept throughout the tournament. For his part, Hierro was named the tournament's Best Defender--the first time that honor was awarded.

After leaving Madrid, he played one season each for Qatari team Al Rayyan and English team Bolton before retiring in 2005.