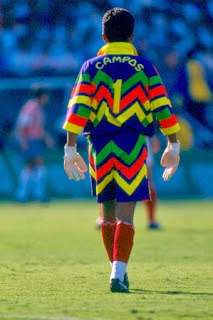 On 8 January 2004, Mexico's flamboyant goalkeeper Jorge Campos announced his retirement from football, taking his self-designed colorful kits with him.

Born in Acapulco on 15 October 1966, Campos started his professional career in 1988 with Club Universidad Nacional, better known as Pumas. In order to get time on the pitch, he played as a striker until he won the job as first-team keeper. In 1991, he got his first cap for Mexico and would go on to make 130 appearances for El Tri (in 7 of those, he played as both a keeper and a striker, and in 2 others, he played only as a striker).
Although well-known for his bright and unique kits, which he designed himself, Campos was an accomplished keeper. During the 1996 CONCACAF Gold Cup, for example, he did not concede a single goal as Mexico claimed the title with a 2-0 win over invitee Brazil in the final.
His career included spells with numerous clubs in Mexico and the United States, including the Los Angeles Galaxy (1997), Chicago Fire (1998) and several seasons with Pumas (1988-96, 1997-98, 1998-2000, 2001-02). At the time of his retirement, he was playing for Puebla (2002-04).
Posted by Brian Seal at 7:24 AM