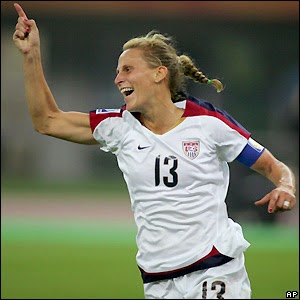 On 18 January 2006, United States forward/midfielder and captain Kristine Lilly became the first player--male or female--to reach 300 caps when she appeared against Norway in the Four Nations Tournament.

Lilly joined the USWNT in 1987 while she was still in high school and has helped them claim several honors, including two World Cups (1991, 1999) and two Olympic gold medals (1996, 2004).
In the 2006 Four Nations Tournament, the US won their match against Norway, 3-1. Lilly contributed the opening goal, her 105th, which tied her with Michelle Akers for second place on the USWNT's all-time goal scoring list. She has since passed Akers to hold second place outright, scoring a total of 129 goals in 342 appearances.
Posted by Brian Seal at 12:01 AM