11 January 2007 - Beckham Becomes The Biggest Star In The Galaxy 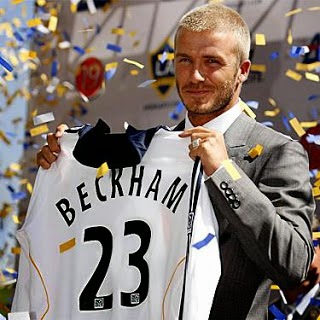 On 11 January 2007, Real Madrid and England midfielder David Beckham shocked the world by announcing that he had signed a contract with the Los Angeles Galaxy. Although Beckham had fallen out of favor at Real under manager Fabio Capello, the move was nonetheless viewed as a significant step down for the English icon, who had reportedly generated interest from bigger clubs including AC Milan and Inter.

Beckham and the Galaxy agreed to a 5-year deal worth approximately $250 million, though his playing wages made up only about 20% of that amount. The remaining 80% came from merchandise sales, sponsorships, and a stake in the club's projected profits.
Real attempted to keep Beckham after he enjoyed a resurgence in form in the second half of the season, helping the club claim its first La Liga title in four years, but he held firm to his commitment and joined the Galaxy in the summer of 2007.
Beckham was not the first English superstar to play in Los Angeles, and in fact wasn't even the first former Manchester United superstar to do so. In 1976, George Best signed with the NASL's Los Angeles Aztecs. Best, who, like Beckham, wore the No. 7 shirt for United, made 55 appearances for the Aztecs from 1976 to 1978.
Posted by Brian Seal at 12:01 AM