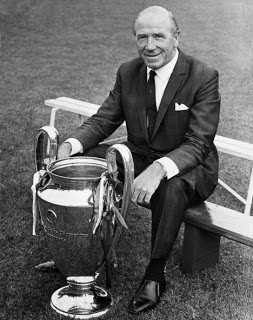 On 14 January 1969, Manchester United manager Matt Busby announced his retirement after 23 years in charge at Old Trafford, effective at the end of the season. As it turned out, it was a temporary retirement.

Although Busby had played for 12 seasons--8 for Manchester City and 4 with Liverpool--before World War II interrupted his career, he had no prior managerial experience when United hired him on 19 February 1945. He quickly mastered the learning curve, leading United to a second-place finish when the league resumed play in the 1946-47 season. They again finished in second place for three of the next four seasons (1948, 1949, 1951) and claimed Busby's first silverware, the 1948 FA Cup, before winning the league in 1952.
Busby was with the team on the way home from a European Cup match against Red Star Belgrade when their plane crashed in Munich on 6 February 1958. Seven players and three club officials were killed, while Busby himself was so injured that he twice received last rites. Remarkably, he recovered from his injuries after two months in the hospital and resumed his managerial duties for the 1958-59 season.
In all, Busby's United won five league titles (1952, 1956, 1957, 1965, 1967), two FA Cups (1948, 1963) and one European Cup (1968).
Upon his retirement, he remained with the club as a director while trainer Wilf McGuinness took over as manager. Busby briefly returned to the touchline when McGuinness was sacked in December 1970, but again retired at the end of that season.
Posted by Brian Seal at 12:01 AM