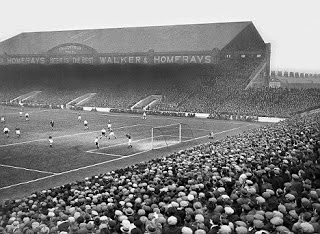 On 17 January 1948, a League-record 83,260 people watched Manchester United draw 1-1 with Arsenal. Although it was considered a home match for United, it was held at Manchester City's Maine Road ground (right), because Old Trafford was undergoing repairs for damage caused during World War II.

At the time, United were in fourth place in the First Division table, nine points behind league leaders Arsenal (who had won the season's prior contest at Highbury, 2-1). The Gunners would go on to win the league, while United would claim that season's FA Cup, as well as their second consecutive second-place league finish.


While the 17 January 1948 attendance set the highest total for a league match, it is second to the overall English record of 84,569, reached at Maine Road for a 6th round FA Cup match between Manchester City and Stoke City on 3 March 1934.

At the end of the 2002-03 season, Manchester City moved out of Maine Road to the new City of Manchester Stadium. By that time, Maine Road had been converted to an all-seater, eliminating the terraces and reducing its capacity to 35,150.
Posted by Brian Seal at 12:01 AM