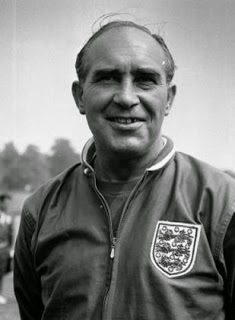 During his playing career as a right-back with Southampton (1943-49) and Tottenham (1949-55), Ramsey developed a reputation as an intelligent, though not necessarily physically gifted, footballer, earning three caps for England (one of which was the upset loss to the United States in the 1950 World Cup). But he truly revealed the breadth of his genius when he switched to management.
His first post as manager was in 1955 with Ipswich Town, then in the Third Division South. By the end of his second season, he led them to the Second Division, then in 1961 they were promoted to the First Division--the club's first-ever appearance in the top flight. Although most pundits thought they'd drop back at the end of the 1961-62 season, Ramsey and Ipswich defied them all by winning the league that year.
Ramsey's success with Ipswich led to his appointment as manager of England in 1963. He embraced the challenge and boldly predicted that England would win the 1966 World Cup. He also shook up the system, personally taking responsibility for team selection and other decisions that had previously been handled by an FA committee.
Ramsey proved his value as a manager and a fortune teller when hosts England did, in fact, win the 1966 World Cup with a 4-2 victory over West Germany in the Final. He was unable to replicate his success, however, and after lackluster performances in the 1968 European Championship and 1970 World Cup, Ramsey was sacked when England failed to qualify for the 1974 World Cup.
He served time as pundit himself, then briefly served as manager for Birmingham City (1977-78), before his death from a heart attack in 1999.
Posted by Brian Seal at 12:01 AM