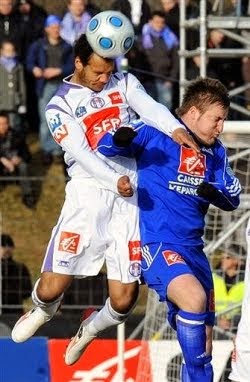 On 24 January 2009, visiting Toulouse crushed seventh-tier amateur side Schirrhein, 8-0, ending their fairy tale run in the 2008-09 Coupe de France. It was the first time in the competition's 91-year history that a team from France's seventh division had made it to the Round of 32.

The 2,000-person village of Schirrhein is located in Alsace near the German border. The local amateur club quietly advanced through the cup's first eight rounds, then made headlines earlier in the month by beating Ligue 2 side Clermont Foot, 4-2, in the Round of 64. Describing the ensuing media blitz that had overtaken the village, Schirrhein manager Herve Sturm said "After beating Clermont, everything went mad. We made ourselves available to everyone who wanted to talk to us and we were happy about that because the media helped us in our success."


Toulouse, however, refused to play their assigned role in the Cinderella story and scored eight goals against Schirrhein--four from Danish striker Soren Larsen. They advanced to the semi-finals, where they lost to eventual Cup winners Guingamp.
Posted by Brian Seal at 12:01 AM