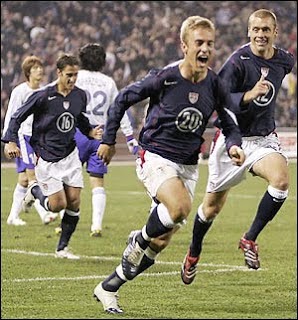 On 29 January 2006, the United States beat Norway 5-0 in a friendly at the Home Depot Center in Carson, California. Three of the Yanks' goals were scored by forward Taylor Twellman, whose hat-trick was only the ninth in the history of the US national team.

Twellman, who plays his club ball for the MLS' New England Revolution, was making a push for inclusion in the 2006 World Cup side. Despite winning the MLS Golden Boot in 2005, he had scored only one previous international goal, in October 2005, since his call up to the senior team in 2002.
Although Twellman appeared to find his scoring touch, contributing another goal in a 3-2 friendly win over Japan in February 2006, he was not part of the side that traveled to Germany in 2006. That team managed to score only one goal--a 43rd-minute strike from Clint Dempsey against Ghana--and was eliminated from the tournament in the group stage. (They also benefited from an Italy own goal to draw 1-1 with the eventual champions.)
Twellman rejoined the national team for their successful 2007 CONCACAF Gold Cup campaign and made his last appearance on 19 January 2008.
Posted by Brian Seal at 12:01 AM