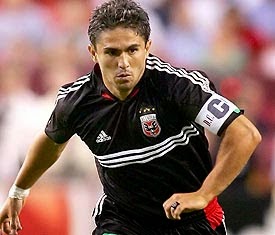 Moreno started his professional career in 1991 with his hometown club, Blooming. After two successful seasons, he transferred to Colombian side Independiente Santa Fe, but made only 5 league appearances before transferring again in 1994, this time to English Division One side Middlesbrough. When Boro were promoted for the 1995-96 season, he became the first Bolivian to play in the Premier League.
After playing sparingly for Middlesbrough, Moreno returned to the Western hemisphere in 1996 to play for DC United in the new American league. Other than one season (2003) with the MetroStars, Moreno has remained with DC ever since. Along the way, he earned several honors, including four MLS Cups (1996, 1997, 1999, 2004), two US Open Cups (1996, 2008), and one CONCACAF Champions Cup (1998).
In 1997, he won the MLS' Golden Boot, scoring 16 goals in 20 league appearances. He retired in 2010 and is the league's third all-time top scorer, with 133 goals, all but two of which he scored with DC United.