12 January 1967 - Five Paragraphs And Not A Single Booger Joke 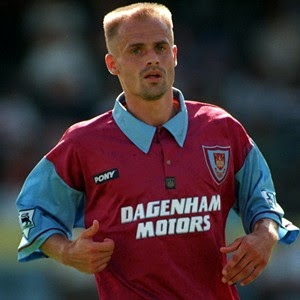 On 12 January 1967, future West Ham striker and reported caravan enthusiast Marco Boogers was born in the Dutch city of Dordrecht.

Boogers started his professional career in 1986 for his hometown side, Drechtsteden '79, then in the Dutch second division. He played for a number of other Dutch clubs before making an ill-fated switch to West Ham in July 1995 for a transfer fee reported to be between £750,000 and £1 million.
In his second match for the Hammers, against Manchester United, Boogers came on as a substitute and was promptly sent off for a rough challenge on Gary Neville. He made only a few more appearances before being sidelined by knee surgery on 19 December 1995. He went home to the Netherlands for his recovery.
Upon learning of his absence, The Sun reported that he had disappeared to a caravan park in the Netherlands. Apparently, they were unable to reach Boogers and asked West Ham's PA announcer, Bill Prosser, where he was. Prosser, who was also responsible for making the players' travel arrangements, responded that he had not booked any flights for Boogers, so "if he's gone back to Holland, he's probably gone by car again." The Sun reporter misheard Prosser as saying "by caravan," thus giving rise to the rumor that Boogers was on permanent holiday.
Boogers never played for West Ham again, but moved back to Holland where he enjoyed a successful career.
Posted by Brian Seal at 12:01 AM