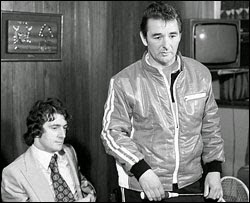 On 9 February 1979, Nottingham Forest manager Brian Clough introduced the press to his newest signing, English striker Trevor Francis--the first player in England to break the £1 million transfer fee barrier. Clough added to the spectacle by showing up at the press conference in a bright red leather jacket with his squash racket in hand.
When Clough signed Francis from Birmingham City, he was careful to set the transfer fee at £999,999 in order to prevent the "million pound" mark from going to the striker's head. But taxes pushed the total fee over £1.1 million, more than doubling the previous record of £495,000, paid by Manchester United to Middlesbrough for defender Gordon McQueen in February 1978.

With Francis in the side, Forest lost only one league match for the remainder of the season, finishing second in the Division One table, and won the League Cup. The crown jewel in their season, however, was their 1-0 win over over Swedish side Malmö in the 1979 European Cup Final, with Francis heading in the winning goal.
That proved to be the highlight of Francis' career. Injuries hampered his time at Forest, preventing him from playing in their win in the 1980 European Cup Final, and he moved to Manchester City in 1981 for £1.2 million.