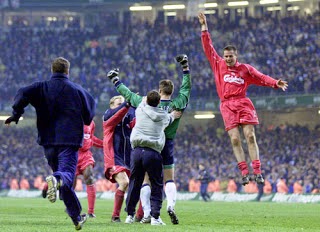 On 25 February 2001, Liverpool and Birmingham fought a closely-contested League Cup Final, with the Reds getting the win on penalty kicks - the first penalty shootout in the final of a major English tournament.Playing before a crowd of 73,500 at Cardiff's Millenium Stadium, Liverpool took the lead with a 30th-minute strike from their homegrown hero, forward Robbie Fowler, who deftly beat the Birmingham keeper with a world class shot from 25 yards out. Although Birmingham had plenty of possession throughout the match, they were unable to find the mark, with their best chances coming through a couple of headers that just went wide of the goal.The trophy appeared to be Liverpool's when Birmingham received a lifeline courtesy of Liverpool center back Stéphane Henchoz, who, in the dying moments of regulation, fouled Birmingham midfielder Martin O'Connor in the box. Center back Darren Purse converted the 90th-minute penalty kick, sending the match into extra time.

The sides swapped chances in extra time, but were unable to score. In penalties, they were even at 4-4 after five shooters, with Liverpool's Sander Westerveld and Birmingham's Ian Bennett saving one shot each. Jamie Carragher then put Liverpool ahead 5-4, when Birmingham forward Andy Johnson stepped up to the spot. He sent a timid kick to his right, easily saved by Westerveld to give Liverpool the win - their first major trophy since previously winning the League Cup in 1995.