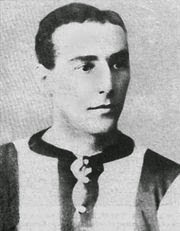 On 15 February 1913, Irish debutant Billy Gillespie (pictured) scored his first two international goals, giving his side a 2-1 victory over England in the 1913 British Home Championship. The win was Ireland's first ever over England in 32 matches.

The match was played at Windsor Park in Belfast before a crowd of 20,000. It was England's first contest in that year's tournament, while Ireland had already played one match, a 0-1 loss to Wales on 18 January.
England gained the early advantage with a 35th-minute strike from winger Charlie Buchan, but Gillespie brought the hosts level in the 43rd minute, then put them ahead for good seventeen minutes later. Unfortunately for Ireland, it was their only win of the tournament and they finished in last place after a 1-2 loss to Scotland. England rallied to win their last two matches, 4-3 over Wales and 1-0 over Scotland, to finish in first place. Ireland and Gillespie would gain some revenge the following season, however, beating England 3-0 on their way to the BHC title, the first outright title won by Ireland.
Gillespie, an inside forward who played his club ball for Sheffield United, would go on to become Ireland's most-capped player with 25 appearances and score a total of thirteen goals--a record that would not be tied until 1992 (by Colin Clarke) and not broken until 2004 (by David Healy).
Posted by Brian Seal at 12:01 AM