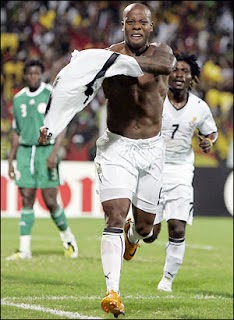 On 3 February 2008, hosts Ghana defeated neighboring rivals Nigeria in the quarterfinals of the 2008 Africa Cup of Nations. The 2-1 win for the Black Stars avenged losses to Nigeria in two of the previous three tournaments.

Playing in Accra's Ohene Djan Stadium before a crowd of 45,000, Nigeria's Super Eagles took a first-half advantage when striker Yakubu Ayegbeni converted a 35th-minute penalty kick. The score momentarily silenced the home crowd, but they soon regained their voice and exploded with joy when Ghana midfielder Michael Essien equalized in the second minute of first-half injury time.
Ghana carried the momentum into the second half and continued to press, despite the sending off of their captain, John Mensah. In the 88th minute, striker Junior Agogo (pictured) netted the match-winner, sending the Black Stars through to the next round.
Perhaps drained from their emotional win over Nigeria, the Black Stars were unable to find the net in their next match, a 1-0 loss to Cameroon, but did not go home empty-handed, beating the Ivory Coast 4-2 in the third-place match.
Posted by Brian Seal at 12:01 AM