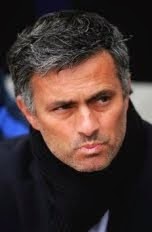 On 23 February 2002, visitors Beira Mar defeated hosts Porto 2-3 in a Portuguese top flight league match. It was Porto's first home loss under new manager José Mourinho, who had taken charge the previous month. It would also be Mourinho's last home loss in a league match until 2011, a run of 150 matches that extended from his time at Porto through his tenure at Chelsea, Inter, and Real Madrid.

While generally regarded as a footnote to Mourinho's record, the match itself was an exciting one. Porto played a man down for most of it, as defender Jorge Andrade was red carded in the 25th minute for a challenge on Beira Mar midfielder Bruno Ribeiro on the edge of the box. Cristiano Rocho scored with the ensuing free kick to put the visitors ahead 1-0. But despite being down to 10 men, Porto equalized with a 42nd-minute goal from striker Benni McCarthy.


Beira Mar striker Fary Faye, who had come on a substitute at the start of the second half, restored the lead for his side in the 51st minute. The situation then got worse for Porto, as midfielder Deco received a second yellow card and was sent off in the 74th minute, reducing the hosts to nine men. Amazingly, however, Mourinho's undermanned Porto again equalized, this time with a 82nd minute goal from midfielder Carlos Paredes. But in the dying moments, Beira Mar overran Porto's depleted midfield, allowing Fary to score his second goal of the match in the 85th minute to give his side the 2-3 win.


Mourinho remained with Porto through the 2003-04 season, before moving to Chelsea in June 2004. After leaving Chelsea in September 2007, he took some time off before moving to Inter in June 2008. His unbeaten run includes 66 matches at Chelsea, setting a Premier League record that the club extended to 86 under Mourinho's successors Avram Grant (2007-08) and Luiz Felipe Scolari (2008-09). Porto's streak, meanwhile, ended eleven matches into the 2004-05 season with a 1-0 loss to Boavista on 20 November. It was their sixth home match under new manager Victor Fernández.

The streak ended on 2 April 2011, when Real Madrid team lost at home to Sporting de Gijón.
Posted by Brian Seal at 12:01 AM