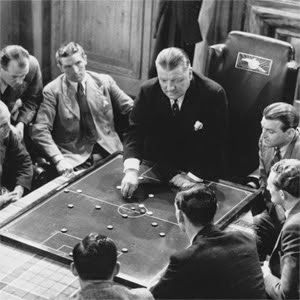 On 17 February 1940, The Arsenal Stadium Mystery opened in theaters across Britain. Directed by influential English filmmaker Thorold Dickinson, the movie was one of the first to include football in a prominent role.

The story follows Inspector Anthony Slade (played by Leslie Banks) as he attempts to solve the murder of a football player who died from poisoning while his amateur side, the fictitious Trojans, were playing a friendly against Arsenal at Highbury. The movie was actually filmed at Highbury, with several Arsenal players, including forward Cliff Bastin and full back Eddie Hapgood, playing parts. But of all the Gunners players and staff to appear in the film, only manager George Allison (pictured) had a speaking role.
To film scenes of the match between Arsenal and the Trojans, Dickinson shot footage of an actual league match between the Gunners and Brentford, played on 6 May 1939. In order to double as the Trojans, the Brentford players wore a special striped kit for the occasion.

The actual match ended as a 2-0 win for Arsenal. It was the last match for either side before the league suspended football for the duration of World War Two.
Posted by Brian Seal at 12:01 AM