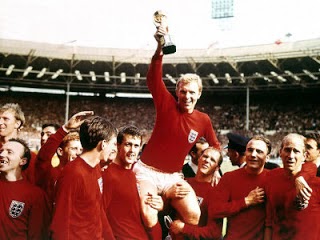 Moore began his professional career in 1958 with West Ham, where he would stay for just over 15 seasons. Despite having fairly average physical talents, he was gifted with an uncanny ability to read the game and anticipate where the ball was going. That, combined with his impeccable timing, made him one of England's top defenders. He earned his first cap for England at 21, and at 22, became the youngest person to captain the English senior side.
He got his first silverware in 1964, when he led the Hammers to the FA Cup trophy, also earning personal accolades as the Football Writers' Association Footballer of the Year. He followed by helping West Ham to the 1965 UEFA Cup Winners' Cup with a 2-0 win over 1860 Munich. But he is best remembered for captaining England to the World Cup title in 1966, where Moore set up two of England's goals in the 4-2 win over West Germany in the Final. He would go on to make 108 appearances for England, making him England's most-capped player at the time, though Peter Shilton (125) and David Beckham (currently at 115) would later go on to surpass Moore's total.
Moore left West Ham in 1974 for London rivals Fulham, then in the Second Division. In his first season with Fulham, they met West Ham twice, beating them in the League Cup, but losing to the Hammers in the 1975 FA Cup Final. He also spent some time in the US during the English off-season, playing for the San Antonio Thunder and Seattle Sounders before retiring in 1978.
Afterward, Moore spent a brief period in management before moving on to work as a commentator. He made his last public appearance in the commentators' booth for England's match against San Marino on 17 February 1993, one week before his death.