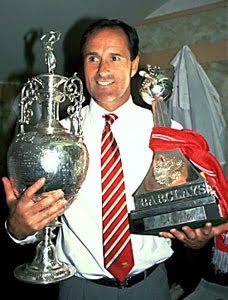 On 21 February 1995, Arsenal sacked manager George Graham after learning that he had accepted illegal payments from an agent in return for signing two of the agent's players.Graham, a Scottish midfielder and forward, had spent the majority of his playing career at Arsenal, making 226 appearances from 1966 to 1973. He returned to Highbury as manager in 1986, after first establishing his managerial credentials at Millwall (1982-86). In his first season in charge, the Gunners finished fourth and won the League Cup, their first silverware since winning the FA Cup in 1979.After that first season, he continued his successful run by winning two league titles (1989, 1991), the FA Cup (1993), another League Cup (1993), and the UEFA Cup Winners' Cup (1994). In early 1995, however, it was revealed that Graham had accepted £425,000 from agent Rune Hauge in exchange for signing two of Hauge's clients in the early 90s, Norwegian full back Pål Lyderson and Danish midfielder John Jensen. The resulting scandal led to his sacking on 21 February and a 1-year ban issued by the Football Association.

After the ban expired, Graham returned to football as manager of Leeds United in September 1996. He remained there for two seasons before moving to Arsenal rivals Tottenham Hotspur, where he stayed until his retirement in 2001.
Posted by Brian Seal at 12:01 AM