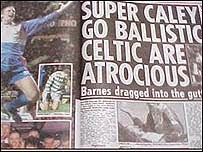 On 8 February 2000, second-tier Scottish club Inverness Caledonian Thistle upset hosts Celtic in the Third Round of the Scottish Cup by the score of 1-3, giving rise to one of the most famous headlines in football.

Celtic were under a lot of pressure to win, having just suffered a home loss to Hearts and trailing Premier League leaders Rangers by 10 points. And they had been knocked out of the UEFA Cup three months earlier by Lyon, failing to score a goal in either leg, so the Scottish Cup looked to be their last chance to take home a major trophy.
Underdogs Caley were unwilling to concede, however, and took an early lead with a 16th-minute header from midfielder Barry Wilson. Celtic equalized two minutes later thanks to striker Mark Burchill, but handed the lead back to Caley with an own goal from back Ľubomír Moravčík in the 24th minute. The visitors extended their lead in the 57th minute with a penalty kick and Celtic failed to mount a further challenge.
After the match, the Sun immortalized it with a headline that has since become as famous as the upset itself: "Super Caley Go Ballistic, Celtic Are Atrocious." (The headline was borrowed in part from a less well-remembered one written in the 1970s about Liverpool's Ian Callaghan: "Super Calley Goes Ballistic, QPR Atrocious.")
The loss proved decisive for Celtic manager John Barnes, then in his first season at Celtic Park. It was to be his only season, as he was sacked shortly after the loss and replaced by Kenny Dalglish. Dalglish would provide the club with some consolation, leading Celtic to that season's Scottish League Cup trophy, but it was not enough for him to keep the post and he was replaced by Martin O'Neill.