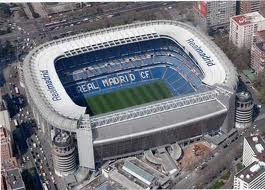 On 27 October 1944, construction began at Real Madrid's new stadium, the Nuevo Estadio Chamartín. Now known as the Estadio Santiago Bernabéu, it is one of the world's most famous football venues.

The club had played previously at the old Estadio Chamartín, which was constructed in 1923 and held a crowd of 22,500. By 1944, however, club decided it needed a larger stadium to accommodate the growing supporter base. In June of that year, they purchased land next to their existing stadium and began planning the construction of the new one.

The construction lasted just over three years, resulting in a new capacity of 75,145 (27,645 were seated, with the remainder on terraces). On 14 December 1947, Real Madrid inaugurated their new home with a match against Portuguese side Os Belenenses.

The stadium has undergone several renovations over the years, at one point expanding to hold a partially seated crowd of 125,000. It has since been converted to an all-seater with a current capacity of 80,354. During that time, it has hosted important matches including four World Cup matches and the 2010 Champions League Final.

In 1955, the club chose to rename it after the man who spearheaded its construction, former club president Santiago Bernabéu.
Posted by Brian Seal at 12:01 AM