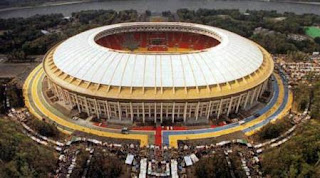 On 20 October 1982, Russia suffered its worst sporting disaster when at least 66 people died as a result of a stampede at Spartak Moscow's Luzhniki Stadium. Some reports place the number of casualties as high as 340.

A crowd of approximately 10,000 was there that day to watch Spartak Moscow challenge HFC Haarlem in the second round of the UEFA Cup. The low number of spectators, caused in part by extraordinarily cold weather that day, prompted stadium officials to open only the East Stand, with only one exit.

Spartak took a 1-0 lead into injury time and several supporters made their way out of the stadium. But a late goal from Spartak defender Sergei Shvetsov drew several of them back toward the stands to join in the celebration. The two streams of people met at the exit, where dozens of people were trampled and crushed. The official death toll is 66, but eyewitnesses claim to have seen hundred of bodies.

Russian authorities initially covered up the incident, with newspapers reporting only that there had been an accident at the stadium that had injured some supporters. Russian newspaper Sovetsky Sport finally broke the full story in 1989--seven years later. Three years after that, a memorial was placed outside the stadium.
Posted by Brian Seal at 12:01 AM