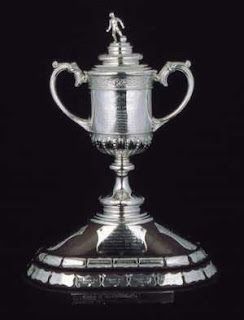 Sixteen clubs entered the inaugural tournament, which started with an unseeded knockout round. The clubs contributed the money used to purchase the cup and medals--a total of £56 12s 11d. Of those first eight matches, two were forfeits. The widest winning margin was Queen's Park's 7-0 victory over Dumbreck, followed closely by Clydesdale's 6-0 win over Granville.

Renton advanced to the semi-finals, where they lost to eventual winners Queen's Park, 2-0. A year later, the same two teams met in the Final, with Queen's Park winning again.

Although the FA Cup tournament predates the Scottish Cup by two years, the first FA Cup trophy was stolen in 1895, making the current Scottish Cup the oldest existing national tournament trophy in the world.
Posted by Brian Seal at 12:01 AM