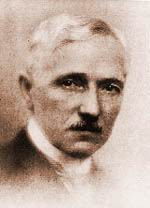 On 14 October 1873, future FIFA President and World Cup founder Jules Rimet was born in the French village of Theuley-les-Lavoncourt.

A lawyer by training, Rimet first got involved with football in 1897 when, at the age of 24, he founded a sports club on the outskirts of Paris and called it Red Star. Despite not being a footballer himself, he chose football as one of the sports to be played at the club.

After serving in World War I and winning the Croix de Guerre, Rimet became the first president of France's new football association, the Fédération Française de Football (FFF), in 1919. Two years later, he became the president of FIFA. At the time, FIFA had only a dozen members. By the time he retired in 1954, that number had grown to 85.

It was during his time at FIFA that he pushed his idea for an international tournament that became the World Cup. In recognition, FIFA named the first trophy after him.