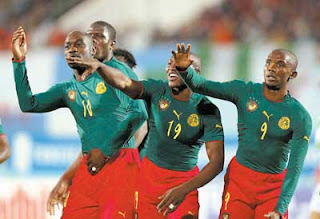 On 13 October 2006, FIFA announced its decision to dock Cameroon 6 points in their qualification campaigns for the 2010 World Cup and 2008 African Cup of Nations--all because the Indomitable Lions wore a unitard.

Cameroon had a history of kit controversy after wearing sleeveless shirts at the 2002 African Cup of Nations. Afterward, FIFA told them they could not wear them at the 2002 World Cup, so Puma, Cameroon's kit maker, added black sleeves for that tournament.

For the '04 Cup of Nations, Puma provided Cameroon with a new kit. Although the shirt and shorts appeared to be separate, they were actually connected to form a one-piece. Cameroon wore the kit for the tournament's first round, but FIFA told them afterward that they could not wear it for the later rounds. Cameroon, however, pleaded that it was too difficult to obtain replacement kits on such short notice and wore the one-piece for their quarterfinal match against Nigeria on 8 February (Nigeria won, 2-1).

After FIFA announced its long-awaited punishment, it eventually relented and rescinded the points penalties. Meanwhile, Puma took FIFA to court, arguing that the rules of the game did not require the shirt and shorts to be separate. They lost, too.
Posted by Brian Seal at 12:01 AM

Email ThisBlogThis!Share to TwitterShare to FacebookShare to Pinterest
Labels: Cameroon